E-commerce has brought in a logistics boom in China over the last decade, transforming small-town delivery businesses into multinational corporations. One leading player, YTO, is gearing up for international expansion after it secured 6.6 billion yuan, or $970 million, from its long-time ally and client, Alibaba. 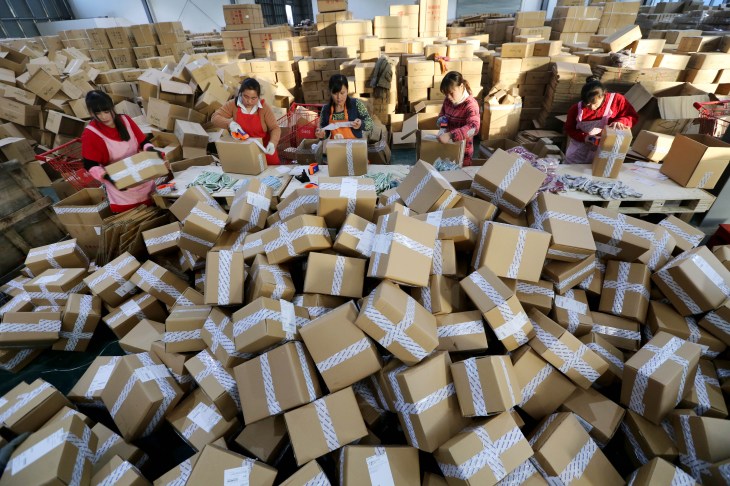 Twenty-year-old YTO announced this week it will sell 379 million shares to Alibaba at a price of 17.4 yuan per share, lifting Alibaba’s stakes in YTO from 10.5% to 22.5%. The founding couple of YTO owns a controlling stake of 41% via their wholly-owned firm after the transaction. The new investment, according to the notice, will allow Alibaba and YTO to deepen collaboration on areas including delivery, air freight, global network and supply chains and digital transformation as part of their ambition to beef up their global reach. An Alibaba spokesperson said the company is “pleased to further strengthen the strategic partnership with YTO, focused on digitization and globalization to enhance the customer service capabilities.” YTO, which commands a 14% share of China’s express delivery market, is among the five logistics behemoths that hail from eastern China’s rural county of Tonglu. Along with rivals STO, ZTO, Best Express and Yunda, YTO’s rise is inseparable from Alibaba, which relies on third-party logistics services rather than building its own infrastructures like Amazon and JD.com. The e-commerce giant has over the years invested various amounts in all five major couriers from Tonglu, a relationship that anchors its logistics arm Cainiao, which matches vendors and express couriers to handle 50 billion parcels a year. The duo was already partnering on international expansion back in 2018 when a Cainiao-YTO joint venture began building a digital logistics center at Hong Kong International Airport, the world’s busiest cargo airport. State-owned airline China National Aviation Corporation also holds a stake in the joint venture, and the center is due to begin operation as soon as 2023. As of 2019, YTO had set up 18 entities and 53 service stations worldwide that support its distribution in 150 countries and regions. The overseas push plays into its larger goal to tap the enormous export potential brought by the Belt and Road Initiative, China’s grand plan to build rail lines, telecommunication networks and other forms of infrastructure around the world.
Tags -